MALLS FOR
YOUR SHOPPING
DELIGHT
Lacoste
Classic French chic with a sporty touch. Lacoste has long been the favourite of sportsmen and those in the upper echelons of society, and along the way, its clothing has achieved a sort of cultural panache which you simply cannot fake. From Pablo Picasso's choice of espadrille footwear (Lacoste calls them Riez footwear) to more formalwear likely to make its way to the forward cabin of any aircraft, Lacoste oozes class, sophistication and originality. Choose from a range of exceptional clothing, perfume, leather goods, eyewear, belts, and of course, footwear, and people in the know will know you are going places. 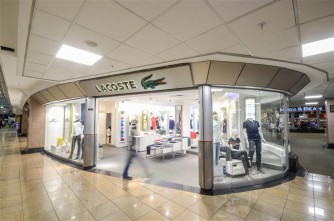